The Trinity in light of Scripture and reason by Rudolph P. Boshoff

In this blog, I want to touch on some of the points that I made in a recent debate that I participated in with the well-known debater Dr. Shabir Ally and my good friend Yusuf Ismail. In all honesty, I believe that as Christians, we should be able to defend the merits of the Doctrine of the Trinity with a fair amount of ease. When I was attempting to describe a setting in the first century I thought it would be helpful for our conversation. Next I wanted to show the reasonableness of the doctrine as we move from the Scriptural context.

A Scriptural understanding of Paul and the Trinity.

I’d like to look at the reality that can be seen in the reception and memory of Church believers, as well as how the community would reconcile specific ideas. Paul clearly draws on pre-existing assumptions, not only from His own Jewish understanding of the Divine, but also from the communities he is writing to. 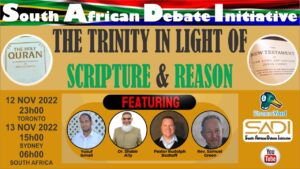 As a result, he frequently mentions in his letters,

“I want to remind you of the gospel I preached to you, which you received and on which you have taken your stand.” (1 Cor 15:1) or;

Paul cautions the Church to watch out for;

“any man is preaching to you a gospel contrary to what you received.” (Gal.1:9).

There are numerous instances where Paul calls for what was already known in the Church. He does not appear to be teaching a novel or novel idea, but rather appears to be evoking an existing kerygma or teaching in the first Christian community. It is important to note, then, that memory and the reconciliation of information of the teachings of Christ and His Apostles were dear to the first Christian communities. Maintaining the central kerygma were something inherent to their teaching and learning.

When Paul addresses the first group of Christians, we can then inquire as to what their level of understanding was at that time about the place of Christ and the person of the Father (1 Cor. 8:6). What is the most important point that Paul is attempting to make? Paul expresses, without a shadow of a doubt, a concept of Yahweh as a multifaceted oneness in his writings. Dr. Chris Tilling affirms that Paul, the Trinitarian in the first century of the Christian Church era, reveals and affirms an assumed triadic understanding of Yahweh in the first Christian community. He holds that we can conclude that “Paul’s thinking is Trinitarian” and, “Paul’s writings witness to the Trinity.” This reality would then be expressed as the temperament of the first Christian community, as affirmed by Paul. There are a few places in his letters that are plainly Trinitarian.

“There is one body and one Spirit, just as you were called to one hope when you were called; one Lord, one faith, one baptism; one God and Father of all, who is over all and through all and in all. “But to each one of us, grace has been given as Christ apportioned it.” (Eph. 4:4–7)”.

Notice we are not advocating for a systematic of the Trinity, but rather show there is a definite imperative that reveals both the One and the Three Trinitarians get excited about. We identify a clear distinction between persons and functions as we see in the Pauline texts mentioned above. Just a word on the perceived plurality in Unity. Islamic and Christian theologians are of the same opinion that every divine action of God corresponds to a specific attribute of him and is, at the same time, a manifestation (zuhur) of His present divinity.[1]

There is a difference though, according to most Islamic scholars, these manifestations are not a manifestations of Allah’s person or his being. On the other hand, according to the Christian Scriptures, the living Word of God—the Logos—and his Spirit, without being duplications of the Father, are direct manifestations of God’s personhood. Now the question Trinitarians are kept on being asked is why three in One and not six in one etc? The obvious answer is, well the Bible speaks of the threeness of God and the Unity of God.

These are but Scriptural arguments for the Trinity. Now for some arguments from reason.

The Christian claim is then that God is the Three Persons, and the Three Persons are God. Consequently, for us to know God as Triune is to know the one Lord of God in his internal relations as a fullness of a personal Being, and not in an undifferentiated oneness as an isolated transcendental Thou. The reason for this is that we insist God is the greatest conceivable and intrapersonal being. A lucid thinker Tim Chester insists that:

“God is personal because He exists eternally in the triune relationship. Personhood is about relationship and reciprocity. God cannot be solitary. If one God is not a community of persons, then He cannot be personal, and if He is not personal, we cannot know Him. God is knowable because he is relational, and He is relational because He exists as three persons, then He would forever be hidden in “light inaccessible.” We have no access to the One except through the Three”.[2]

When we explicate that God is personal, we basically say that God’s personhood demands an inner reality free and dependent on His own self. In all Unitarian Theologies, God needs His creation to be what he is, and other religions must blur the line between God and creation. Not so with a triune conception of God. In it, the Trinity is consistently unlike anything in creation. Robert Letham explains this point beautifully when he writes,

“Only a God who is Triune can be personal. Only the Holy Trinity can be love. Human love cannot possibly reflect the nature of God unless God is a Trinity of persons in union and communion…. Trinitarian theology asserts that love is ultimate because God is love, because he is three persons in undivided loving communion.”[3]

Another point to consider concerns itself with the transcendent and immanent realities when we speak about the ontology of God.

Christians are not pantheists that hold to the fact that God is immanent in all things neither are we deist’s that remove God from His created order. To uphold God’s omnipresence with a clear distinction of his essence without detaching him from the created order in perfect balance, we need to advocate for a Divinity that is actually present in the world yet, distinct from the World. I would posit that it is only the Trinitarian conception of God that can consistently uphold these tensions. There are three essential and eternal characteristics (wasf) of the Divinity that are accepted by both Islam and Christianity:

These characteristics are similar to the structure of the triune God! Of his condition as Being, Word, and Spirit, or “Father,” “Son,” and “Holy Spirit.” The Trinity expresses the very essence of God, who has revealed himself with the terms of Father, Son, and Holy Spirit.

God’s omnipresence requires His personal or actual presence in all space, time, and matter. These realities are only upheld if God is Triune. Lastly, I want to quickly reflect on the logic of the Trinity.

“If the single divine nature is identical with three equal self-existent persons, then God must be essentially ‘One’ and ‘Three,’ rather than essentially “Unitary.”[4]

How can we say this then without committing a logical contradiction? Well, allow me to show you the logic of the three in one. [5]

It would clearly be a logical contradiction.

Also; if we said:

2). God is not three persons that would also be a contradiction.

In conclusion I want to say that the same questions seem to emerge from these discussions and the repetitiveness of these questions could be interpreted as a lack of interest in the answers given. That being said, we will persist in our pursuit of our own witness and the vindication of what we believe especially when we look at this doctrine and the reality of Jesus Christ.

[5] To believe in God as a Trinity in his eternal Being is to reject all forms of extreme unitarianism and polytheism. In fact, to conceive of God as Unity and Trinity, Trinity and Unity, is the most exclusive of all possible conceptions of God, not only because there is no humanly explicable way to think of the Three as One and the One as Three, but also because of God’s unique nature as Father, Son, and Holy Spirit in his one eternal Being.