The Creed – What we believe and why we believe it? by Pastor Rudolph Boshoff

The Apostles’ Creed sometimes titled Symbol of the Apostles is an early statement of Christian belief. Credo is the Latin word for “I believe.” The Early Church said the Creed together and started with “we believe”. (Credimus) The account of the origin of this creed, the forerunner and principal source of the Apostles’ Creed, as having been jointly created by the Apostles under the inspiration of the Holy Spirit, but with each of the twelve contributing one of the articles (there is no evidence for this) but the Creed was already current from a very early time in the infant Church. The earlier text evolved from simpler texts based on Matthew 28:19 and it has been argued that it was already in written form by the late second century (circa 180). While the individual statements of belief that are included in the Apostles’ Creed – even those not found in the Old Roman Symbol – are found in various writings by Irenaeus, Tertullian, Novatian, Marcellus, Rufinus, Ambrose, Augustine, Nicetus, and Eusebius Gallus, the earliest appearance of what we know as the Apostles’ Creed was in the De singulis libris canonicis scarapsus (“Excerpt from Individual Canonical Books”). The Creed today is seen a source of debate. Luke Timothy Johnson writes “The creed is also a source of controversy among Christians. A significant number of Christians reject any form of the creed.

For some, especially in the Anabaptist and Free Church traditions, the creed is too much an instrument of ecclesiastical tradition and power, too much associated with the development of Christianity into Catholicism, too much shaped by philosophy and too little by Scripture. Such Christians, who view the Bible as an exclusive authority that individuals can understand by themselves, consider the creed to be an instrument of coercion rather than a glad confession of faith, a monument to the church’s power rather than a movement of the Holy Spirit. The Jesus Seminary says, “The Christ of the creed and dogma, who have been firmly in place in the Middle Ages, can no longer command the assent of those who have seen the heavens through Galileo’s telescope.” The Church “appears to smother Jesus.” And its instrument is “the smothering clouds of historic creeds.” The figure of Jesus in the creed is “a mythical or heavenly figure, whose connection with the sage from Nazareth is limited to his suffering and death under Pontius Pilate. Nothing between his birth and death appears to be essential to his mission or the life of the Church” (The Five Gospels, 2, 7-8).

Cox separates the history of Christianity into three periods: the age of faith, stretching from the time of Jesus only a few centuries until Constantine; the age of belief, stretching from Constantine until the 20th century; and the age of the spirit, now dawning. During the age of faith, “their sharing in the living Spirit of Christ united Christians with each other, and ‘faith’ meant hope and assurance in the dawning of a new era of freedom, healing, and compassion that Jesus had demonstrated.” Cox makes the point that doctrinal questions just weren’t all that important back then, and though differences existed, they weren’t considered to be fundamental to the religion. “Confidence in Christ was their primary orientation, and hopes for his [earthly] Kingdom their motivating drive.” For other Christians, a fixed structure of belief is less desirable than a good heart and an open mind. Creeds, they think, close minds and harden hearts. The critics remind us that there are real dangers in adhering to a creed. It can be accepted uncritically and unthinkingly. It can abet intellectual laziness. It can be used as a theological cudgel. It can replace the reading of Scripture and legitimate the embrace of a divine Christ that obscures his humanity.”

But what do we believe: 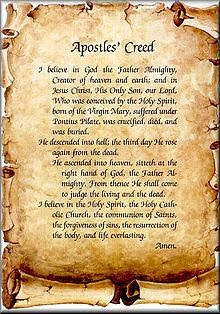 There is an African concept that states that a person is only truly a person because of other people. And we as a community of Faith hold true to the Christian Community of the ages. This concept was also valuable in the early Church. John the Beloved disciple wrote in 1 John 3: 19-24 “This is how we know that we belong to the truth and how we set our hearts at rest in his presence: If our hearts condemn us, we know that God is greater than our hearts, and he knows everything. Dear friends, if our hearts do not condemn us, we have confidence before God and receive from him anything we ask; because we keep his commands and do what pleases him. And this is his command: to believe in the name of his Son, Jesus Christ, and to love one another as he commanded us. 24 The one who keeps God’s commands lives in him, and he in them. And this is how we know that he lives in us: We know it by the Spirit he gave us.”

We are surrounded by such a great cloud of witnesses by whom we can affirm our essential believes and vibrant believes. [Hebrews 12:1-2] The rude gesture that we are growing away from a “creedal faith” concept to a “believe centered” concept baffles me a bit? Harvey Cox clearly miss the way Paul tries to put down the boundaries of faith as well as exclusive element to our central believes. But was there a difference in the way the earliest followers of “the way” saw their relationship with God and one another? The answer is yes? These communities in the beginning were not set on defending anything. The infant Church was still in its forming period, but we can see as the Church moved forward, the early Church Fathers clearly saw the need to define and reflect faith. As a result we see early heresies being defined and church doctrine being defended. Cox and the Jesus Seminary would argue that these very dogmatic “building blocks” was what went wrong in the early Church up to now?

But scripture is not repelled by this concept; rather drawn to it! All through the New Testament we are called to “study to show ourselves approved” (2 Tim 2:15.); to show “seriousness integrity and soundness of speech that cannot be condemned” (Titus 2:7-8) and to “Set apart Christ as Lord. Always be prepared to give an answer to everyone who asks.” (1 Peter 3:15)

Paul goes even one better and gives us one of the earliest foundations for the Church creed found in 1 Corinthians 15:1-19. He wrote “1 Now, brothers and sisters, I want to remind you of the gospel I preached to you, which you received and on which you have taken your stand. 2 By this gospel you are saved, if you hold firmly to the word I preached to you. Otherwise, you have believed in vain. 3 For what I received I passed on to you as of first importance: that Christ died for our sins according to the Scriptures, 4 that he was buried, that he was raised on the third day according to the Scriptures, 5 and that he appeared to Cephas, and then to the Twelve. 6 After that, he appeared to more than five hundred of the brothers and sisters at the same time, most of whom are still living, though some have fallen asleep. 7 Then he appeared to James, then to all the apostles, 8 and last of all he appeared to me also, as to one abnormally born.

9 For I am the least of the apostles and do not even deserve to be called an apostle, because I persecuted the church of God. 10 But by the grace of God I am what I am, and his grace to me was not without effect. No, I worked harder than all of them—yet not I, but the grace of God that was with me. 11 Whether, then, it is I or they, this is what we preach, and this is what you believed.
12 But if it is preached that Christ has been raised from the dead, how can some of you say that there is no resurrection of the dead? 13 If there is no resurrection of the dead, then not even Christ has been raised. 14 And if Christ has not been raised, our preaching is useless and so is your faith. 15 More than that, we are then found to be false witnesses about God, for we have testified about God that he raised Christ from the dead. But he did not raise him if in fact the dead are not raised. 16 For if the dead are not raised, then Christ has not been raised either. 17 And if Christ has not been raised, your faith is futile; you are still in your sins. 18 Then those also who have fallen asleep in Christ are lost. 19 If only for this life we have hope in Christ, we are of all people most to be pitied.

Paul makes pretty strong statements and clearly puts a benchmark down to believe and what to believe.

How to believe well:

We built our faith: on what Corresponds with reality (The Bible) [Romans 10:17.] What constitutes us relationally (the Church or Community of faith) [1 Timothy3:15(c) and by our accountability and integrity to these two foundations of believe. (Apologetically) [2 Timothy 2:15]

The Creed:
I believe in God, the Father almighty, creator of heaven and earth.
I believe in Jesus Christ, his only Son, our Lord.
He was conceived by the power of the Holy Spirit and born of the Virgin Mary.
He suffered under Pontius Pilate, was crucified, died, and was buried.
He descended to the dead. On the third day he rose again.
He ascended into heaven and is seated at the right hand of the Father.
He will come again to judge the living and the dead.
I believe in the Holy Spirit,
The holy catholic Church, the communion of saints,
the forgiveness of sins,
the resurrection of the body,
and life everlasting.
Amen.