The idea that God would allow His Son to be crucified on a cross has always been seen as foolishness by Christian naysayers.  The first we read of it, is recorded by the Apostle Paul in First Corinthians 1:18 when he says in this awesome teaching:

“For the preaching of the cross is foolishness to those being lost, but to us being saved, it is the power of God.”

However, in the year 1857, a piece of graffiti, now known as the Alexamenos Graffito, was discovered on the Palatine Hill in the centre of Rome when a building called the Domus Gelotiana was excavated.  Believed to date from the early third century A.D., the picture, etched or scratched in plaster, it depicts a human-like figure with a donkey looking head, attached to a cross.  To the left is Alexamenos, with one hand raised in prayer.  Below are scrawled the Greek words “ΑΛE XAMENOΣ ΣEBETE ΘEON,” which translates to “Alexamenos wor 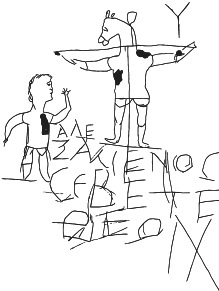 Adjacent to this image is another inscription in a different hand which reads in Latin Alexamenos fidelis, meaning “Alexamenos is faithful” or “Alexamenos the faithful.”  It is argued that this second graffiti is a response by an unknown party to the mockery of Alexamenos in the image shown here.

This is the earliest image of a Christian associated cross yet uncovered.  Without doubt, this image was intended to mock both Alexamenos and his God,  and also all Christians, as the artist accuses Christians of practicing ‘onalatry,’  or ‘donkey-worship’, apparently a common taunt against Christians, at that time.  Historians have since uncovered many roots to this depiction leading back to Satanic Egyptian images.

Though the use of a cross as a means of public execution has now disappeared and the image of a donkey-headed man on a cross does not have the same social impact today as it would have had in the past, nevertheless,  the intent of the image is still clear to Christian observers today and the attitude behind the artist’s etching, is still rife in the world today.  Currently, an estimated 100+ million Christians face daily persecution, particularly in North Korea, Iran and Saudi Arabia.  A recent study reported that 75 out of every 100 people killed due to religious hatred, are Christian.

As Paul said, “the preaching of the cross is foolishness to those being lost, but to us being saved, it is the power of God.”   Christianity is a both a great mystery and a stumbling block, to non-Christians.  The idea that any God would willingly allow His only Son to be crucified for us, is simply counter-intuitive.  The idea that any Son of any God, let alone The Son of God would willing sacrifice  Himself for us, is far beyond being even counter-intuitive.  Yet, this is at the centre of Christianity.  In looking at the question as to why any man, let alone the Son of God, would willingly allow himself to be crucified naked and in public, just beggars belief.  Paul’s assertion that such preaching is foolishness to those who are lost, is spot on.  So too is Paul’s assertion regarding the power of God in those who choose to believe; and awesome are the miracles which God has performed at their hands.  If we read the above passage in Eugene Peterson’s paraphrased version of the bible, The Message, the clarity of the situation, even today, shines out from the words:
“The Message that points to Christ on the Cross seems like sheer silliness to those hellbent on destruction, but for those on the way of salvation it makes perfect sense.  This is the way God works, and most powerfully as it turns out.”
Oh that people would believe this.  Oh that the Holy Spirit would remove the scales from the eyes, and the cloth from ears, and the demonic control from the minds of those who see and hear this Word.

Christianity is all about Jesus and who He was and is, and cannot be separated from what which He came to do for us here on earth.  He could not do it from Heaven; He could only do it by becoming fully man and becoming the Second Adam, so He could redeem us and claim back the rulership of the earth, which the first Adam lost.
Some 1,700 years ago a man by the name of Alexamenos was mocked for his faith in Rome.  Now Christian Faith, the same as Alexamenos’, has covered the world and is now nearing completion of Christ’s Great Commission.  Let us never forget Alexamenos and the thousands of Christians who died in Rome for their faith; these thousands who died in unimaginable pain and agony, subject to the most horrendous tortures and deaths imaginable.

But as we look at the etching, let us not be downcast, for we are in possession of the complete Word of God, which Alexamenos did not have.  From that Word we know that God wins and we are victors over the enemy.  We have scriptures from Jesus to take home and touch and read and re-read, like:

Blessed are you when men shall revile you and persecute you, and shall say all kinds of evil against you falsely, for My sake.”
Matthew 5:44   “But I say to you, Love your enemies, bless those who curse you, do good to those who hate you, and pray for those who despitefully use you and persecute you.”
Matthew 10:23  “But when they persecute you in this city, flee into another; for truly I say to you, In no way shall you have finished the cities of Israel until the Son of Man comes.”
John 15:20  “Remember the word that I said to you, The servant is not greater than his master. If they have persecuted Me, they will also persecute you.  If they have kept My saying, they will also keep yours.”
First John 4:4  “You are of God, little children, and you have overcome them, because He who is in you is greater than he who is in the world.”