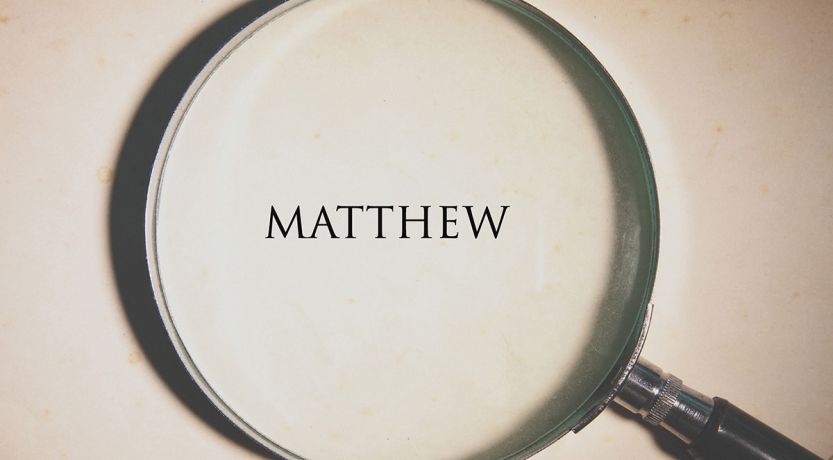 “one of the most highly treasured accounts of Jesus’ life among the early Christians. This may explain why it was given pride of place as the first Gospel in the New Testament canon.”[1]

Central to all the Gospels is the recorded life and memories of Jesus as the coming Jewish Messiah (Matthew), the Saviour of the World (Luke), Son of God (Mark), God incarnate (John). Matthew relates the central theme of Jesus being Immanuel, God with us (Matt.1:23), but what are the other titles given to Jesus in this gospel? In Matthew’s Gospel (16:13-20) he relates the story where Jesus asks the disciples the opinion of people about himself.

“When Jesus came to the region of Caesarea Philippi, he asked his disciples, “Who do people say the Son of Man is?”

Employing this subtle tactic, Jesus ultimately relates the full extent of his own identity to the disciples blessed the words of Peter describing him as the “Messiah, the Son of the living God” but that is not all. Here are a few other titles attributed to Jesus:

The Angel of the Lord appears to Joseph and declares:

“She will give birth to a son, and you are to give him the name Jesus, because he will save his people from their sins.”

The Magi came from the east and asked:

“Where is the one who has been born king of the Jews? We saw his star when it rose and have come to worship him.”

John the Baptist laments the hypocrisy of the Pharisees and the Sadducees and speaks of the Messiah to come after him as the one who will:

“who is more powerful than I, whose sandals I am not worthy to carry. He will baptize you with the Holy Spirit and fire. His winnowing fork is in his hand, and he will clear his threshing floor, gathering his wheat into the barn and burning up the chaff with unquenchable fire.”

“The tempter came to him and said, “If you are the Son of God, tell these stones to become bread.”

Matthew records the fact that when the crowds heard Jesus speaking, they were astonished and overwhelmed by Christ’s teaching.

“for He was teaching them as one who had authority [to teach entirely of His own volition], and not as their scribes [who relied on others to confirm their authority].”

Jesus encounters two interesting individuals in chapter 8 where both recognize His authority to hear, the one needed personal healing from leprosy and the other asked if Jesus could just speak the word and heal his servant. Interesting that both affirmed his authority and called Jesus Lord.

“Lord, if You are willing, You are able to make me clean (well).”

“Lord, I am not worthy to have You come under my roof, but only say the word, and my servant will be healed.”

Matthew accounts for two demoniacs that encountered Jesus and they affirmed His authority as the Son of God. Interestingly they recognize that Jesus is the arbiter of judgement and that He will ultimately be the one that decides their eternal fate with the judgement to come.

“What business do we have [in common] with each other, Son of God? Have You come to torment us before the appointed time [of judgment]?”

Jesus encounters people that brings a paralytic to Him for healing, and seeing their faith replies that both the paralytic’s sins are forgiven and then Jesus healed Him. Here is the reaction from the religious Scribes:

“This man blasphemes [by claiming the rights and prerogatives of God]!”

Jesus enters the house of a tax collected and hangs out with the non-observing sinners and ate with them. The Pharisees could not believe that this Jesus would dare tarnish his good reputation by associating with these low life scoundrels. Matthew recalls them saying:

“Why does your Master eat with tax collectors and sinners?”

Matthew shows frequently in this chapter that Jesus was well attested in the region to be both a healer and exorcist. People clearly seek Him out for healing, and demoniacs are set free:

“My daughter has just now died; but come and lay Your hand on her, and she will live.”

“If I only touch His outer robe, I will be healed.”

“Have mercy and compassion on us, Son of David (Messiah)!”

“Never before has anything like this [miracle] been seen in Israel.”

John the Baptist is probably one of the most enigmatic figures in the Gospel narrative. Prophetically he would be the very last Prophet who would inaugurate the coming Kingdom of the Messiah declaring the arrival of Yahweh (Mal.3:1). John challenges the very notion and send word to Jesus from prison;

“Are You the One who is to come, or should we expect someone else.”

Jesus cures a mute and blind demoniac but the pharisees from the harness of their hearts lamented that Jesus did so via the agency of Beelzebub. Jesus obviously debunks the very idea saying that a Kingdom divided against itself cannot stand.

“The man drives out demons only by Beelzebub, the ruler of the demons.”

Herod thought of Jesus as the return of John the Baptist. He says;

“This is John the Baptist!” “He has been raised from the dead, and that why supernatural powers are at work in him.”

Jesus commands His disciples to go alone across the lake and at about three in the morning after they have struggle to get to the other side, he comes to them walking on the water. Out of fear the disciples terrified, thinks He is a ghost, yet, when Jesus reveals Himself, they account for the fact that he is more than just the coming Messiah, but the Lord over creation, and they worship Him.

“Truly you are the Son of God!”

Jesus in the area of Sidon and Tyre are approached by a Canaanite woman calling for Him to have mercy on her and her daughter that was tortured by a demon. She says;

Jesus enters Caesarea Philippi and asks the Disciples what the common understanding is about His identity amongst the people they encounter. The Disciples give some indication, but Peter gets to the very heart of it.

“Some say John the Baptist; others, Elijah; still others, Jeremiah of one of the Prophets.”

“You are the Messiah, the Son of the living God!”

Jesus is transfigured and turns into His true glorified form, and Peter tries to be religious suggesting a place for Him as well as for Moses and Elijah. The Father then speaks from heaven with the charge:

“This is my beloved Son. I take delight in Him. Listen to Him!”

“Lord, have mercy on us Son of David!”

Jesus enters Jerusalem on the back of a donkey and colt just as the Prophetic books predicted and the crowds sing with joy:

“Hosanna to the Son of David! Blessed is He who comes in the name of the Lord! Hosanna in the highest heaven!”

When Pilate finally gives the crowds options between Jesus, who was innocent, and Barabbas, a criminal, he asks the crowd about the Jew from Galilee:

“Pilate said to them, “Then what shall I do with Jesus who is called Christ?”

The Soldiers before Jesus’ crucifixion mocks Him and calls Him King of the Jews.

The Soldiers realize at the very death of Christ that He was in fact the Son of God.

“Truly this was the Son of God!”

There is no doubt as to Matthew’s intention when he relates the story of Jesus as the Messiah, but what is fascinating is how Matthew shows clearly what was rumoured and attributed to Jesus by other people.