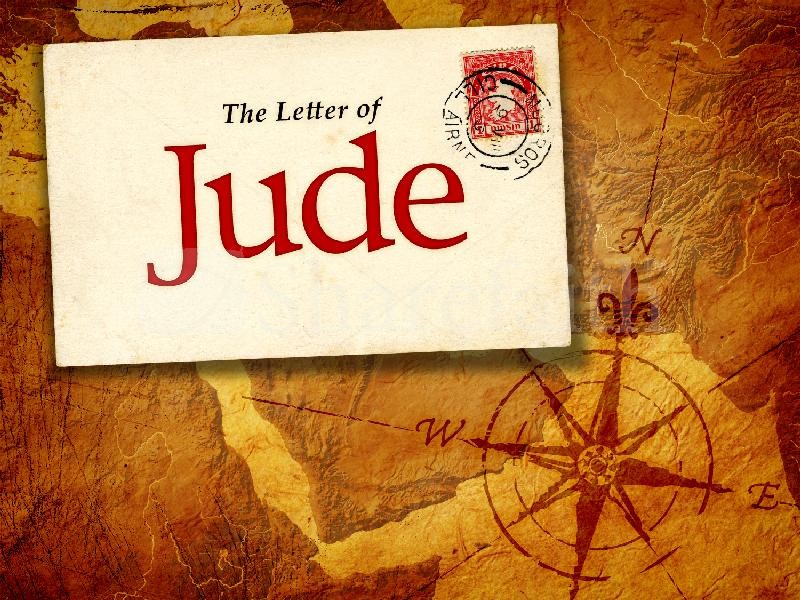 In  “Jude’s letter” or the “Epistle of Jude” authored by Jude the Brother of James the Just we find one of the most interesting variant readings in the New Testament text. This type of variant reading is what could be understood as a “elucidating alteration” for clarification of the overall reading of Jude’s central message.The variant reading and the manuscripts that support them tell us to chose between the reading Ιησους (Jesus) and Κυριος (Lord). Either way the overall context denotes Christ’s pre-existence as well as His rightful action present in History Before His own Incarnation. This makes the Early Church understanding quite explicit concerning the Identity and place of Christ within biblical history.

(There are also readings that include θεος and θεος Χριστος).

It is interesting to note that majority of textual critics prefer “kurios” or Lord where the earliest manuscript readings rather indicate “Iēsous” or Jesus. This is also solidified by “Sharp’s Rule” which indicates that the preferred personal pronoun in verse 4 identifies with the identity of the figure in verse 5.

Clifford Kvidahl also mentions: “the reason that I chose Ιησους over Κυριος was because I felt it to be the reading with the strongest manuscript support as well as the difficult reading. The fact the name Ιησους is connected with the Exodus makes this reading harder than if it was Κυριος or even θεος. Scribes had the tendency to not make a reading more difficult, but rather to try to smooth it out. Because Jesus is not mentioned in the Exodus, the presence of Ιησους seems to be out of place, therefore a scribe may want to change it to fit the Exodus account where it is God that leads the people out of Egypt.”

Here is how different translations have interpreted the Greek texts:

5 Now I want to remind you, although you once fully knew it, that Jesus, who saved a people out of the land of Egypt, afterward destroyed those who did not believe.

5 Now I desire to remind you (even though you have been fully informed of these facts once for all) that Jesus, having saved the people out of the land of Egypt, later destroyed those who did not believe.

5 So I want to remind you, though you already know these things, that Jesus first rescued the nation of Israel from Egypt, but later he destroyed those who did not remain faithful.

5 I will therefore put you in remembrance, though ye once knew this, how that the Lord, having saved the people out of the land of Egypt, afterward destroyed them that believed not.

Some reputable scholars says the following about this variant reading:

Despite the weighty attestation supporting Ἰησοῦς (A B 33 81 322 323 424c 665 1241 1739 1881 2298 2344 vg copsa, bo eth Origen Cyril Jerome Bede; ὁ Ἰησοῦς 88 915), a majority of the Committee was of the opinion that the reading was difficult to the point of impossibility, and explained its origin in terms of transcriptional oversight (ΚΧ being taken for ΙΧ). It was also observed that nowhere else does the author employ Ἰησοῦς alone, but always Ἰησοῦς Χριστός. The unique collocation θεὸς Χριστός read by P72 (did the scribe intend to write θεοῦ χριστός, “God’s anointed one”?) is probably a scribal blunder; otherwise one would expect that Χριστός would be represented also in other witnesses.

The great majority of witnesses read ὁ before κύριος, but on the strength of its absence from א Ψ and the tendency of scribes to add the article, it was thought best to enclose ὁ within square brackets.

[Critical principles seem to require the adoption of Ἰησοῦς, which admittedly is the best attested reading among Greek and versional witnesses (see above). Struck by the strange and unparalleled mention of Jesus in a statement about the redemption out of Egypt (yet compare Paul’s reference to Χριστός in 1 Cor 10.4), copyists would have substituted (ὁ) κύριος or ὁ θεός. It is possible, however, that (as Hort conjectured) “the original text had only ὁ, and that οτιο was read as οτιΙΧ and perhaps asοτιΚΧ” (“Notes on Select Readings,” ad loc.).

{D} {D} The letter {D}, which occurs only rarely, indicates that the Committee had great difficulty in arriving at a decision. In fact, among the {D} decisions sometimes none of the variant readings commended itself as original, and therefore the only recourse was to print the least unsatisfactory reading.

b. Most mss read κύριος (or ὁ κύριος), but some important mss and versions (A B vg copsa, bo eth Origen) have Ἰησοῦς, a few have ὁ θεός, and P72 has θεός χριστός. Probably κύριος should be preferred since it could have given rise to the other readings as attempts to resolve the ambiguity in κύριος (cf. the similar readings at 1 Cor 10:9). It is not likely that Jude would have used Ἰησοῦς of the preexistent Christ (despite Hanson, Jesus Christ, 165–67; F. F. Bruce, This is That [Exeter: Paternoster, 1968] 35–36): other NT examples ( 2 Cor 8:9 ; Phil 2:5–6 ; and perhaps Heb 2:9 ) have the Incarnation directly in view. Nor could Jude have used Ἰησοῦς for the OT Joshua (as Jerome, In Jovin. 1.21, thought; also Kellett, “Note”; Wikgren, “Problems,” 148–49) since Joshua did not destroy the unbelievers (v 5b) or keep the angels in chains (v 6). In the second century, however, the coincidence of names between Joshua son of Nun and Jesus Christ was frequently exploited in the interests of typology (Barn. 12:8; Justin, Dial. 24.2; 75.1–2; Clement Alex., Paed. 1.60.3), and Joshua as a type of Jesus could be said to have led the people out of Egypt (Justin, Dial. 120.3). This typology could not have been intended by Jude (since it could not apply to v 6, which has the same subject), but could have attracted a scribe (who could miss its pitfalls) and account for his changing κύριος to Ἰησοῦς, rather than to Χριστός (which would, as Spitta objects, be expected otherwise, and is the corresponding variant in 1 Cor 10:9 ). mss manuscript(s)

‘This is an allegory’, says Paul, or ‘these are allegorical entities’, each of them corresponding to a reality in the new situation (cf. NIV: ‘these things may be taken figuratively’). He is not thinking of allegory in the Philonic sense (allegory in the Philonic sense was introduced into Christian interpretation with Origen and his successors); he has in mind that form of allegory which is commonly called typology: a narrative from OT history is interpreted in terms of the new covenant, or (to put it the other way round) an aspect of the new covenant is presented in terms of an OT narrative. Typology presupposes that salvation-history displays a recurring pattern of divine action: thus the exilic prophets portrayed their people’s return from Babylon in terms of a second Exodus, and the NT writers portray the Christian redemption in terms both of the Exodus and of the return from Babylon. Paul supplies simple examples of such typology when he says that ‘Christ, our paschal lamb, has been sacrificed’ ( 1 Cor. 5:7 ) or shows how the people of Christ in this age experience their own counterparts of the Red Sea passage, the manna, the water from the rock and the vicissitudes of the wilderness wanderings ( 1 Cor. 10:1–11 ). The exodus typology in particular was widespread in the NT period (cf. Heb. 3:7–4:11 ; Jude 5). NIV New International Version

The first example comes from Israel’s history, when “the Lord delivered his people out of Egypt.” God considered Israel his special people. With many miracles he brought this nation out of Egypt and set his people free from slavery. Once again the Greek text has some variant readings. Translators favor the reading Lord, which they have chosen from the variants “Jesus,” “God,” and even “God Christ.”
The question remains, however, whether the expression Lord refers to God or to the preexistent Christ.22 Scripture presents support for both readings. For instance, Paul says that the spiritual rock that accompanied the Israelites in the desert was Christ ( I Cor. 10:4 ).23 Yet the Old Testament narrative reveals that God destroyed the unbelievers in the desert ( Num. 14:29–37 ; Heb. 3:17–19 ). If the subject of verse 5 in Jude’s epistle is uncertain, verse 6 definitely points to God. Not Jesus but God consigned fallen angels to dark prisons (compare II Peter 2:4 ). Accordingly, I interpret the term Lord in verse 5 to refer to God.

[Vol. 16: New Testament commentary : Exposition of the Epistles of Peter and the Epistle of Jude].

“By ‘the Lord’ is no doubt meant Christ.”

The editor of the NET Bible:

The reading Ιησους (Iēsous, “Jesus”) is deemed too hard by several scholars, since it involves the notion of Jesus acting in the early history of the nation Israel. However, not only does this reading enjoy the strongest support from a variety of early witnesses (e.g., A B 33 81 1241 1739 1881 2344 pc vg co Or1739mg), but the plethora of variants demonstrate that scribes were uncomfortable with it, for they seemed to exchange Κυριος (kurios, “Lord”) or θεος (theos, “God”) for ᾿Ιησοῦς (though P72 has the intriguing reading θεος Χριστος [theos Christos, “God Christ“] for Ιησους). In addition to the evidence supplied in NA27 for this reading, note also {88 322 323 424c 665 915 2298 eth Cyr Hier Bede}. As difficult as the reading Ιησους is, in light of v. 4 and in light of the progress of revelation (Jude being one of the last books in the NT to be composed), it is wholly appropriate.

“Certainly Jesus is the more difficult reading. The Editors of the UBS Greek New Testament called it “difficult to the point of impossibility,” and so adopted “the Lord” (though with a “D” rating). Bruce Metzger and Allen Wikgren, however, issued a dissent in favor of “Jesus” as the original reading, calling it “the best attested reading among Greek and versional witnesses” (Metzger, Textual Commentary, 726: emphasis mine). It is uncommon for New Testament writers to find Jesus so explicitly in the Old Testament. And when they do (as in John 12.41 and I Cor. 10.4, 9), the human name “Jesus” is not used…Rather, “Jesus” – or possibly “the Lord,” understood as Jesus – is the implied subject of all three incidents of divine judgment to which Jude refers. “Jesus” is most likely the original reading (emphasis mine).”