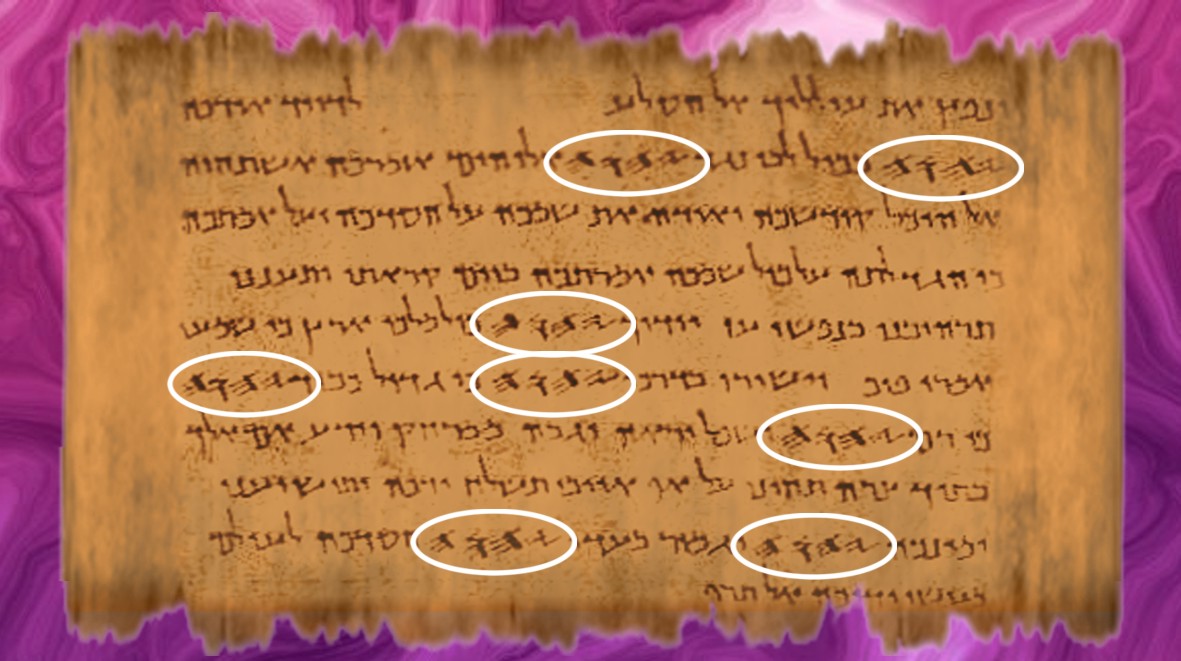 The “nomina sacra” refers to the “Sacred names” found within Early Christian literature.

Theologian Larry Hurtado writes: “The “nomina sacra“, a set of words given special treatment by copyists in ancient Christian manuscripts, continues to be a subject of debate about what the practice signifies and how it originated.  The words in question are written in a unique abbreviated form with a curious horizontal stroke placed over the abbreviation.  The earliest and most consistently treated words are the Greek words for “God,” “Lord,” “Jesus,” and “Christ.  These words are written as nomina sacra in the earliest clear instances of them in Christian manuscripts, which take us as far back as the second century CE.”

Ancient manuscripts were, of course, written by hand, often in large uncial scripts, on papyrus (moderately expensive) or parchment (even more expensive). The expense of writing materials and the time needed to copy a manuscript meant that every attempt had to be made to save space.
One way to conserve materials was abbreviations. A number of strategies were adopted at one time or another — e.g. a superscript sigma at the end of a word, a bar representing a terminal nu, or a special symbol such as an elaborate script kappa for KAI.

The Christians went a step further by creating the nomina sacra (“sacred names”). These were abbreviations formed by taking the first one or two letters of certain words, plus the final letter(s) (to determine the inflection), omitting the intervening letters, and drawing a line over the whole.
The actual form was like this: Instead of writing “Jesus” they would write: “J-s”, where the dash was above, rather than as we have shown it in the middle.

It was an abbreviation, not a substitution or replacement of one word for another.
Metzger (The Text of the New Testament, Bruce Manning Metzger) mentions as included among the that were written in abbreviated form the Greek words for the following:

Jesus, Christ, Son, God, Lord, Spirit, Savior, David, Cross, Mother (with reference to Mary), Father, Israel, Man, Jerusalem, Heaven.
Larry Hurtado writes further: In an article published in 2009 in Journal of Biblical Literature, James R. Edwards drew attention to a fragmentary inscription from the synagogue at ancient Sardis, in which we have θυ (the nomina sacra form of the genitive of θεος, “god”) and with the horizontal stroke over it.  After reviewing what seem to me pretty good reasons for the likelihood that this inscription reflects the influence of the Christian scribal practice, Edwards (curiously to my mind) then urges that the inscription somehow lends support to the view that the nomina sacra began among Jews.(James R. Edwards, “A Nomen Sacrum in the Sardis Synagogue,” JBL 128 [2009]: 813-21.)
The external identifying characteristics of the witnesses to the text of the Christian Bible-the types of abbreviation of the nomina sacra, use of the codex, a common pattern of names for the individual books (“Gospel according to . . . “; “General Epistle of. . . “; “Epistle of Paul to . . .”), and a uniform name for the two parts of the whole collection (“New Testament” and “Old Testament”)-all go back to the earliest stage of transmission. They show the work of a single redactor who produced the canonical edition of the New Testament as part of a total Christian scripture .(Lee Martin McDonald, James A. Sanders, Editors: The Canon Debate; Everett Ferguson, Factors Leading to the Selection and Closure of the New Testament Canon, p 311, 2002)

Recently David Trobisch proposed that a second-century editing process produced and published the twenty-seven-book New Testament we have today, in the order: Gospels; Acts and the Catholic Epistles; fourteen letters of Paul, with Hebrews located between 2 Thessalonians and 1 Timothy; and Revelation. Evidence is found in the choice of authors to whom New Testament books are ascribed, in editorial remarks in the New Testament writings themselves (including in Acts, 2 Timothy, 2 Peter, and John 21), in the widespread use of the nomina sacra in early manuscripts of the New Testament, and in the codex form. I mention Trobisch’s proposal here, as I mentioned above the consensus view that the New Testament canon was in place in the late second century, only to ask how what we discover in Eusebius a century and a half later might challenge or support such views.

Although the individual gospels do not contain the names of their authors, it is probable that the inscriptions naming them (for example, “According to Mark”) were attached as soon as people knew about more than one gospel, or at latest when they were published together in a codex. T. C. Skeat has suggested that Christians adopted the codex in order that they could copy the four gospels together. The consistent system of abbreviating certain words (nomina sacra, fifteen in total) in Christian biblical codices points to the likelihood of recessions, i.e., editions of the New Testament that aimed at a standardized text for Christian worship. This may have happened in the second century, and at latest in the third century.

Barton has observed that when nomina sacra (sacred names that are abbreviated or contracted in the ancient biblical manuscripts) appear in ancient manuscripts, those manuscripts were considered sacred. The nomina sacra included important names such as Jesus, Father, Son, Christ, Holy Spirit, Savior, and such like. The fact that early Christian scribes contracted special words from both the Old Testament and the New Testament suggests that they viewed both collections as sacred in the same sense.” 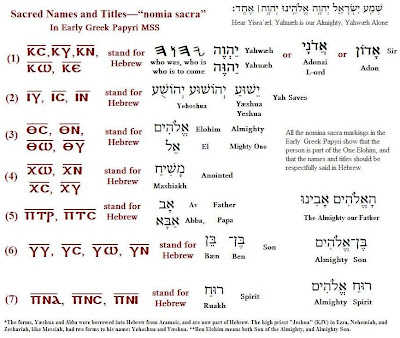 Jeff Smelser writes “The use of nomina sacra was not limited to the writings which we recognize as the New Testament. For example, in the Shepherd of Hermas (included in Codex Sinaiticus), first leaf first column, I see three occurrences- qeou (of God) abbreviated as QU in line 30,pneuma (spirit) abbreviated as PNA in line 35, and anqrwpoV (man) abbreviated as ANOS in line 38. (In the earliest manuscripts, S = s = V was written with the appearance of our letter “C”.) There are more occurrences in each of the remaining columns.”
http://larryhurtado.wordpress.com/2010/09/22/nomina-sacra-the-continuing-debate/