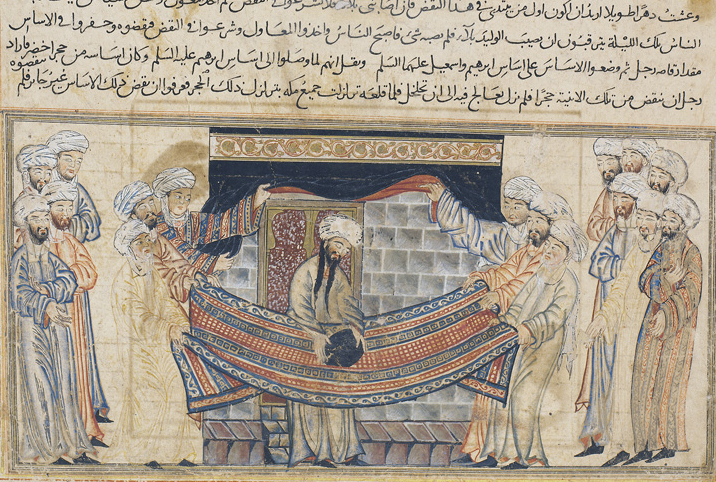 Memoirs of the Man

All we know of Muhammad comes from Muslim sources which were written 150 to 200 years after his death. He died in 632 AD. In comparison, the earliest biographies of Jesus (Gospels) were written 30 to 60 years later by his contemporaries.

The Four Principles sources of information are:

1. Quran: provides some historical information about Muhammad’s life. Fuller accounts are available in the…….

3. The authentic (Sahih) Hadith collections of Words and works of Muhammad (870 AD). The two important collections are by Bukhari and Muslim. Both over 200 years too old.

The Qur’an teaches that Muhammad was an ordinary man (43:31).

Muhammad means “highly praised”. He was sincere, honest and trustworthy. Because of the honesty in his conduct and dealings, he was referred to as al- Sadiq (The Truthful One) and al-Amin (The Trustworthy One)  before Prophethood according to his biographer Ibn Ishaq in Sirat Rasulullah Pg 86.

It is not known for certain when Muhammad was actually born. According to tradition, he was born in the Year of the Elephant (570 AD).

Year of the Elephant

When the army of elephants, under the leadership of Abrahah, the Christian Ethiopian commander, came to Mecca to destroy the Kaaba, it was defeated. The Arabs would refer to events as being either before ‘The Year of the Elephant’ or after it. According to Islamic tradition, Muhammad was born in that year.

In the Name of Allah, the Beneficent, the Merciful, have you not seen how your Lord dealt with the owners of the Elephant? Did He not bring their stratagem to naught; And send against them swarms of flying creatures, Which pelted them with stones of baked clay, And made them like green crops devoured (by cattle).  (Surah 105: 1-5)

Mecca a city in present-day Saudi Arabia. Most tribes were polytheistic with 360 idols in a shrine called the Kaaba, (meaning cube in Arabic).  Muhammad’s families were the guardians and caretakers of the Kaaba. Mecca was a center of pilgrimage and trade.

“Did He not find you an orphan and give you shelter; and find you lost (i.e. unrecognized by men) and guide them to you; and find you in want and make you to be free from want?  (Surah 93:6-8)

At the age of nine, he went on business trips with his uncle.

The experience that Muhammad held working with caravans in his uncle Abu Talib’s family business had earned him the honorific titles Al-Sadiq (“the Truthful”) and Al-Amin (“the Trustworthy” or “Honest”).

And verily, you have an exalted standard of character…” (Surah 68:4)

Khadija a widow ( known among the Arabs as the “Princess of the Merchants”) hired Muhammad (who was 25 years of age), as business manager, to oversee the transportation of her merchandise to Syria.
She sent one of her servants, Maysarah, to assist him. Upon returning, Maysarah gave accounts of the honorable way that Muhammad had conducted his business, with the result that he brought back twice as much profit as Khadijah had expected.

Khadijah, therefore, proposed to marry Muhammad. Khadijah was 40 years old when she married Muhammad, who was 25 years old. She was widowed twice before her Marriage to Muhammad

Muhammad was monogamously married to  Khadijah for 25 years until her death.

After the death of Khadijah, Muhammad married many other women.
Only one year after Khadijah’s death he married Sawda bint Zamʿa and Aisha.

We don’t know why Muhammad remained monogamous with Khadija. It does not say why, in the traditions.  But it is stated that he always did what she told him.

1. Probably she did not want him to marry another woman, though polygamy was practiced at the time. It was not obligatory to have more than one wife. It was only permissible and an option not a command.

3. He was financially dependent on Khadijah. He at first refused Khadijah’s proposal to marry because he was not in a position to marry financially support a wife.

4. Khadijah was in control (called the shots). He was financially dependent on her.

5. Khadijah supported Muhammad. He did not expect her to take care of his other wives if he married.

6. Further, Khadijah was from a prominent clan.

7. He was dependent on his uncle and her for protection against the Meccans.

8. He decided to leave Mecca only after his uncle Abu Talib and Khadijah, his protectors died.

9. He later received “divine revelations” permitting multiple wives but he was faithful to Khadijah  “until death do us part”

Muhammad used to go to meditate in a cave called Hira, located on the mountain Jabal an-Nour, near Mecca.

In 610 he allegedly received his first revelation through angel Gabriel in the month of Ramadan, the ninth month of the Islamic calendar.  It was later named lailatul Qadr or the Night of Power.

Muhammad was forty years old at the time of this first revelation which marked the beginning of his prophethood.

Angel Gabriel asked him to recite (The word “Iqra” in Arabic could be both reading and reciting). He was extremely terrified and thought he was possessed by a jinn. Muhammad’s experience is mentioned in the Quran in Surah (Chapter) 53 Aya (Verse) 4–9. It is recorded in much detail in the traditions eg the Hadith of Sahih Bukhari volume1, book 1, number 3 (see Appendix) He continued to receive revelations until his death. The revelations were memorized and written down by his companions on pieces of sheepskin, bones, and whatever else was at hand.

The revelations were compiled into a book after his death. The collection is known as the Quran (the scripture of Islam). Because the angel Gabriel would recite the Quran orally to the Prophet, the Sacred Book of Islam  is known as “Al-Quran, The Recitation,”

Muslims worldwide repeat the name of Muhammad 5 times a day in their daily prayers. They repeat in it their confession of faith, the Shahada: There is no God but the God. Muhammad is the messenger of God.

The first convert was his wife Khadija, His old friend Abu Bakr was the first adult male to convert. He becomes the first Caliph, a successor to Muhammad. Muhammad preached against idolatry and pagan worship of the Meccans.  This posed a threat both to the religion and the business trade (selling idols) of Mecca.

Miraj, in Islamic legend, the ascension of the Muhammad into heaven. He was transported in a single night from Mecca by the winged mythical creature Burāq,  to the site of al-Aqsa Mosque in Jerusalem – as referred to in the Quran.

“Holy is He Who carried His servant by night from the Holy Mosque (in Mecca) to the farther Mosque (in Jerusalem) – whose surroundings We have blessed – that We might show him some of Our signs. Indeed He alone is All-Hearing, All-Seeing. (Surah 17:1)

According to Hadith as recorded by Sahih Bukhari, Gabriel then took him to the heavens and the Prophet met several great Prophets including Moses and Jesus. He received the directive that prayers were obligatory five times a day. (Volume 5, Book 58, Number 227)

According to most traditions – this event took place one year before he migrated to Medina.

Migration from Mecca to Medina – 622 AD

Muhammad had to go to Medina because of the hostility of the Meccans towards him. This is known as the Hijra. The Muslim year is reckoned from this date. The Muslim calendar, begins the day on which this event took place, 1 Ah (23 September 622 AD).

Allah (God) did not send any miracles  to Muhammad, and the people wondered:

“Why has no sign been sent down upon him from his Lord?” (Surah 6:37).
Some have even compared Muhammad to Moses, asking “Why has he not been given the like of that Moses was given?” (Surah 28:48). God supports Muhammad in the Quran, saying he is only “a warner” without a sign (Surah  29:50).

The response appears in Surah 29:51

This was not a Miracle by Muhammad. It is alleged he was illiterate. Further Surah 29:51 says God sent down the Qur’an.

The authentic Hadiths by Bukhari and Muslim record many miracles that Muhammad performed. This is written about 250 yrs after the death of Muhammad. Further it condradicts the Qur’an which says Muhammad did not perform any miracles.

*Merchant to Messenger to his Murder

*A short chronology of major events in the life of Muhammad:

570 Born in Mecca. His father was already dead when he was born.

578 The death of Muhammad’s grandfather ‘Abd al-Muttalib who was his custodian. Muhammad’s uncle Abu Talib became his guardian.

610 The first revelation of the Qur’an.

614 The first immigration of Muslims to Abyssinia escaping the persecution of the Meccans.

622. Migration to Medina to escape persecution.