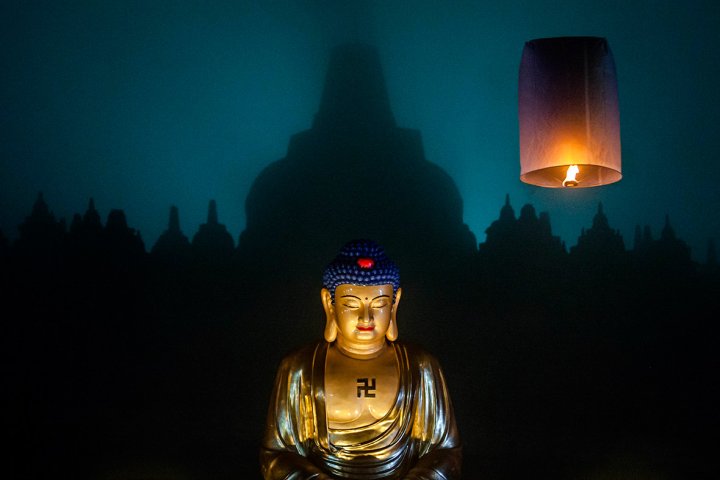 Aren’t there some striking parallels between the Jesus and Buddha stories? Marcus Borg (a “christian”theologian) wrote a very interesting book on the similarities between Jesus and the Buddha
Most of us are somewhat familiar with Buddha. He was also known as Siddhartha Gautama and Shakyamuni Buddha, and he lived between 563 and 483 B.C. Buddha neither claimed to be god or a messenger of god. The definitive biography of Buddha was written by Ashvaghosha in the 1st century. Here is a few points that is made about the parallel between the Buddha & Christ:

1. Buddha was born on December 25th of the virgin Maya, and his birth was attended by a “Star of Announcement,” wise men and angels singing heavenly songs.

According to Ashvaghosha, Buddha was born of the King of Shakyas and his wife, Maya. He wrote that they “tasted of love’s delights” before Buddha was born, thus Buddha was certainly not born of a virgin. The earliest accounts suggest nothing unusual about Buddha’s birth, but later (still pre-Christian) versions suggest Buddha was conceived non-sexually, but don’t state that mommy was a virgin. His birthday is never celebrated on (or believed to be) December 25th (by some traditions, it’s May 8th and there was no star or angels at his birth by any tradition. The king did invite 108 Brahmins to the palace to celebrate his birth, and these could be called ‘wise men’. However, there were no ‘wise men’ of any sort at Jesus’ birth, as the Biblical appearance of the wise men happened at Jesus’ home in Bethlehem when He was one or two years old.

Acharya S. claims in “The Christ Conspiracy” that “Mr. Robertson shows from St. Jerome that the Buddhists themselves did call Maya ‘a virgin’ – they believed in a ‘virgin birth’.” So we have the Buddhists telling St. Jerome who tells Mr. Robertson, from whom Acharya S. heard it… You’d think if this was a common belief, Acharya would be able to find a direct source instead of a third-hand source.

2. At his birth, he was pronounced ruler of the world and presented with “costly jewels and precious substances.”

As for the gifts, while it could be assumed that, as the child of a king, Buddha would be given costly presents, no texts specifically say that he was bestowed with such gifts. And, again, as for Jesus, He was not given costly gifts at His birth. The delivery of the frankincense, gold, and myrrh happened when the wise men came to Jesus’ home when he was one or two years old, not at the manger when he was just born.

3. His life was threatened by a king “who was advised to destroy the child, as he was liable to overthrow him.”

First of all, there are many versions of the Buddha story, and this event occurs only in a rare version unfamiliar to most Buddhists. Secondly, this event doesn’t correspond to the Biblical story of Herod’s attempt to kill Jesus in Matthew chapter 2. Matthew wrote that killing Jesus was Herod’s idea. In the Buddha story, the king in question (Bimbasara) is advised to destroy Buddha, but rejects this advice. So while Bimbasara is advised to kill Buddha, Herod is not advised to kill Jesus. While Herod wants, and attempts, to kill Jesus, Bimbasara does not want, or attempt, to kill Buddha.

4. Was of royal lineage.

This one’s true, but not very meaningful. Buddha was the son of a king, while Jesus was a distant descendant (along with most of His neighbors) of King David. Millions of people are descended from royalty somewhere down the line (I’ve even heard a theory that all Europeans are descendants of Charlemagne), so this one is hardly unique of either of them.

Well, the first word is true. He indeed ‘taught’. But it wasn’t in a temple, and he wasn’t twelve. He was fifteen.

6. Crushed a serpent’s head (as was traditionally said of Jesus) and was tempted by Mara, the “Evil One,” when fasting.

Tradition mentions Buddha killing a serpent, but it doesn’t say that he crushed its head (the exact method of execution isn’t given). Mara was AN “evil one”, not THE “evil one” (the critic here is clearly trying to imply that she was the Buddhist equivalent of the devil, when in fact Mara was one of many demons). Other than the fact that both Buddha and Jesus were tempted while fasting by an evil being, which I’ll admit is somewhat of a coincidence, there’s not much to compare the two stories. Buddha was not in a desert, as Jesus was. Buddha was tempted with incestual pleasures and fear of death, while Jesus was tempted with hunger, putting God to the test, and idolatry. Besides that, the temptations of Jesus bear far more of a resemblance to the temptations of the Israelites in the book of Exodus (which predates Buddha) than they do to the temptations of Buddha, so any claim that Buddha’s temptations are the basis of Jesus’ temptations are ridiculous.

7. Was baptized in water, with the “Spirit of God” or “Holy Ghost” present.

There’s nothing in any Buddha story or tradition about his being baptized.

8. Performed miracles and wonders, healed the sick, fed 500 men from a “small basket of cakes,” and walked on water. 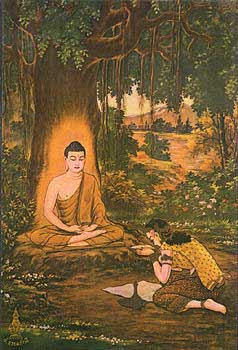 The only one of these I’ve found pre-Christian support for is walking on water. In the Digha Nikaya, Chapter 11 (which was oral tradition from the 5th century B.C. and finally written down in the 1st century B.C.), Buddha is discussing miracles with Kevatta. Kevatta suggests that a display of psychic powers from one of his monks would increase the faith of the locals. Buddha responds, “”Kevatta, there are these three miracles that I have declared, having directly known and realized them for myself. Which three? The miracle of psychic power, the miracle of telepathy, and the miracle of instruction.” Buddha proceeeds to list off examples of psychic powers: “Having been one he [the monk] becomes many; having been many he becomes one. He appears. He vanishes. He goes unimpeded through walls, ramparts, and mountains as if through space. He dives in and out of the earth as if it were water. He walks on water without sinking as if it were dry land. Sitting cross-legged he flies through the air like a winged bird. With his hand he touches and strokes even the sun and moon, so mighty and powerful.”

Of course, if this one parallel were significant enough to suggest that Jesus borrowed from Buddha, then why have Christ-mythers bothered to fabricate all of these other parallels about Buddha? Obviously, the people who fabricated the claims didn’t find this one particularly convincing.

9. Abolished idolatry, was a “sower of the word,” and preached the “establishment of a kingdom of righteousness.”

Not true of Buddha. Not true of Jesus, either. Buddhism encourages idolatry, and idolatry was abolished in the Judeo-Christian faith long before Jesus arrived. There are no specific references to Buddha being a “sower of the word” or preaching the “establishment of a kingdom of righteousness”, but in general these terms would apply to almost any religious figure.

10. Followers were obliged to take vows of poverty and to renounce the world.

True of Buddha, but not true of Jesus. While many Christians do take vows of poverty and renounce the world, Jesus Himself never told all of His followers to do such things. Of course, there is the story of Jesus telling a wealthy young ruler to give everything he has to the poor, but this was a specific command to one man, not a general command to all followers.

11. Was transfigured on a mount, when it was said that his face “shone as the brightness of the sun and moon.”

12. In some traditions, died on a cross.

Buddha didn’t die on a cross in any traditions. Every reference I’ve seen states that he died at the age of 80 of a natural illness. If anyone can find an unbiased reference stating he died on a cross, please E-mail me.

UPDATE: A visitor pointed out to me that Buddha actually died of poisoning. Most of the sites I’m finding about Buddha don’t mention this, but some do. This does appear to be the case.

13. Was resurrected, as his coverings were unrolled from his body and his tomb was opened by supernatural powers.

Nope. Buddha was cremated upon his death and was not resurrected in any tradition.

14. Ascended bodily to Nirvana or “heaven.”

Clearly the critics here have no understanding of the Buddhist concept of Nirvana. Nirvana is a state where the soul is freed from the limitations of the body, so the idea that anyone can ascend ‘bodily’ into Nirvana is laughable.

15. Was called Lord, Master, Light of the World, God of Gods, Father of the World, Almighty and All-knowing Ruler, Redeemer of All, Holy One, the Author of Happiness, Possessor of All, the Omnipotent, the Supreme Being, the Eternal One.

Of the above, Buddha was only called ‘Lord’. And a lot of these don’t apply to Jesus, either.

16. Was considered a Sin Bearer, Good Shepherd, the Carpenter, the Infinite and Everlasting, and the Alpha and Omega.

Buddha was considered none of them.

Nope. He preached the law, but made no mention of the fulfillment or destruction of the law.

18. Is to return “in the latter days” to restore order and to judge the dead.

There is no mention in Buddhism of the old Buddha returning. They believe there will be a completely separate Buddha who will be born. This Buddha will restore order and bring world peace, but not judge the dead. Jesus made no promise of restoring order or bringing world peace on His return.