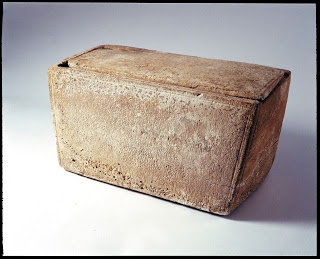 The American Journal of Archaeology (October-December, 1947, LI.4, pp. 351ff.)
This prestigious magazine is the official periodical of The Archaeological Institute of America, located at Boston University. At the gracious courtesy of the Institute, we have been provided with a copy of the full report. The following details doubtless will be of interest to our readers.In September of 1945, an ancient tomb was discovered in the area of the Talpioth suburb of Jerusalem. The small burial chamber (approximately 11 × 11 feet), had been carved out of the soft limestone of that region. The tomb was excavated by officials affiliated with the Museum of Jewish Antiquities located at Hebrew University in Jerusalem.The tomb contained fourteen ossuaries (numbered in that sequence), along with miscellaneous pottery fragments, e.g., lamps and bowls. The article that described the find was prepared by Professor Eliezer L. Sukenik of Hebrew University, one of the tomb’s excavators, and also one of Israel’s leading archaeologists. Working with Sukenik was a colleague, N. Avigad, of the Museum Staff.On some of the ossuaries were carved inscriptions, along with, in a few instances, writings done with charcoal. Here is what the discovery revealed.On ossuray #1 was the name “Simeon Barsaba.” Professor Sukenik believed the family name, “Barsaba,” might well be related to the New Testament references to “Joseph Barsabas” and “Judas Barsabas,” both of whom are mentioned in the book of Acts (1:23; 15:22) — these two men possibly having been brothers. It is thus known that members of this family became identified with the Christian movement in the days of the first-century church.

On ossuary #7 there is this inscription, written in charcoal: Iesous iou,which Professor Sukenik suggested should be rendered “Jesus, woe!” — the latter term being interpreted as an expression of grief.On the flat cover of ossuary #8 was this carved inscription in Greek, Iesous aloth, which again reflects the name “Jesus,” along with a presumed exclamation of mourning (p. 363).The name “Jesus” is not to be associated with any of the remains interred within the tomb. Sukenik noted if the inscription “had pointed to the name of the person buried in the ossuary, we should expect after the name Jesus, the name of the father” — which was conspicuously absent. The professor thus argued that it must be concluded that the term aloth was not a name, but an exclamation of “woe” (p. 363).

Also on ossuary #8, each of the four sides contained a large cross written with charcoal. Sukenik commented:“There can be no doubt that the presence and the size of the crosses on ossuary no. 8 suggest that they were pla
ced there with some definite purpose. They were apparently drawn by the same person who wrote the words Iesous iou on the other ossuary [#7]” (p. 364).The renown 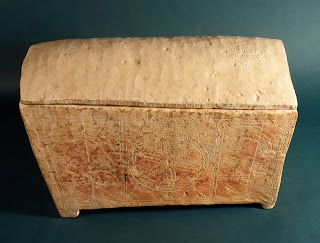 ed archaeologist suggested that these crosses may be a “pictorial expression” for “He was crucified” (p. 365). While it once was claimed that the “cross” did not appear as a symbol of Christianity until the late second century A.D., further discovery has shown that the timeframe for this symbol now must be pushed back into the first century (Sukenik, p. 365).This tomb has been dated in the first half of the first century A.D. (cir. A.D. 42/43), based on pottery fragments therein, as well as a coin belonging to the administration of Herod Agrippa I (cf. Acts 12:1) that was among the rubble.Professor Sukenik concluded with these words:“All our evidence indicates that we have in this tomb the earliest [extra-biblical] records of Christianity in existence. It may also have a bearing on the historicity of Jesus and the crucifixion” (p. 365).Both of these discoveries (1945 and 2002), therefore, join in their testimony relative to historicity of the person so revered in the New Testament — Jesus Christ.