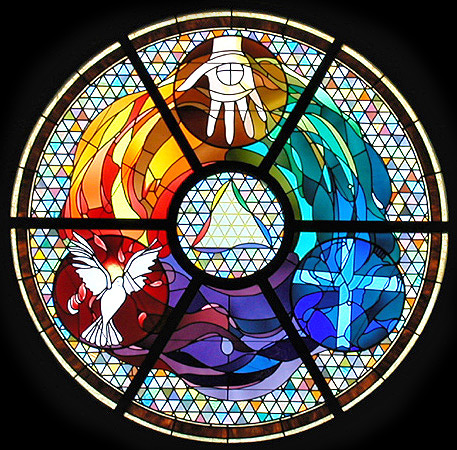 Although the unanimous opinion of the apostolic Fathers was that this was Jesus talking to Abraham, such is a guess and not specifically known by scripture. Having said this, the story of Abraham meeting God and the two angels in Genesis 18, is most likely what Jesus meant when He said, “Your father Abraham rejoiced to see My day, and he saw it and was glad.” ” John 8:56
What the apostolic Fathers said about Genesis 19:24:

150 AD Justin Martyr: In this text, Justin the Christian is trying to convince Trypho the Jew that Jesus is God, by showing one of the three men who appeared to Abraham, was Yahweh himself: ” I [Justin] inquired. And Trypho said, “Certainly; but you have not proved from this that there is another God besides Him who appeared to Abraham, and who also appeared to the other patriarchs and prophets. You have proved, however, that we [the Jews] were wrong in believing that the three who were in the tent with Abraham were all angels.” I [Justin] replied again, “If I could not have proved to you from the Scriptures that one of those three is God, because, as I already said, He brings messages to those to whom God the Maker of all things wishes [messages to be brought], then in regard to Him who appeared to Abraham on earth in human form in like manner as the two angels who came with Him, and who was God even before the creation of the world, it were reasonable for you to entertain the same belief as is entertained by the whole of your nation.” “Assuredly,” he said, “for up to this moment this has been our [the Jews] belief.” … “And now have you not perceived, my friends, that one of the three, who is both God and Lord, and ministers to Him who is in the heavens, is Lord of the two angels? For when [the angels] proceeded to Sodom, He remained behind, and communed with Abraham in the words recorded by Moses; and when He departed after the conversation, Abraham went back to his place. And when he came [to Sodom], the two angels no longer conversed with Lot, but Himself, as the Scripture makes evident; and He is the Lord who received commission from the Lord who [remains] in the heavens, i.e., the Maker of all things, to inflict upon Sodom and Gomorrah the [judgments] which the Scripture describes in these terms: ‘The Lord rained down upon Sodom and Gomorrah sulphur and fire from the Lord out of heaven.’ “(Dialogue of Justin Martyr, with Trypho, a Jew, Chapter LVI.—God Who Appeared to Moses is Distinguished from God the Father.)

180 AD Irenaeus “Therefore neither would the Lord, nor the Holy Spirit, nor the apostles, have ever named as God, definitely and absolutely, him who was not God, unless he were truly God; nor would they have named any one in his own person Lord, except God the Father ruling over all, and His Son who has received dominion from His Father over all creation, as this passage has it: “The LORD said unto my Lord, Sit Thou at my right hand, until I make Thine enemies Thy footstool.” Here the [Scripture] represents to us the Father addressing the Son; He who gave Him the inheritance of the heathen, and subjected to Him all His enemies. Since, therefore, the Father is truly Lord, and the Son truly Lord, the Holy Spirit has fitly designated them by the title of Lord. And again, referring to the destruction of the Sodomites, the Scripture says, “Then the LORD rained upon Sodom and upon Gomorrah fire and brimstone from the LORD out of heaven.” For it here points out that the Son, who had also been talking with Abraham, had received power to judge the Sodomites for their wickedness. And this [text following] does declare the same truth: “Thy throne, O God; is for ever and ever; the scepter of Thy kingdom is a right scepter. Thou hast loved righteousness, and hated iniquity: therefore God, Thy God, hath anointed Thee.” For the Spirit designates both [of them] by the name, of God — both Him who is anointed as Son, and Him who does anoint, that is, the Father.” (Irenaeus, Book 3, ch 6)

200 AD Tertullian “That is a still grander statement [of Christ’s deity] which you will find expressly made in the Gospel: “In the beginning was the Word, and the Word was with God, and the Word was God.” There was One “who was,” and there was another “with whom” He was. But I find in Scripture the name Lord also applied to them Both: “The Lord said unto my Lord, Sit Thou on my right hand.” And Isaiah says this: “Lord, who hath believed our report, and to whom is the arm of the Lord revealed? ” Now he would most certainly have said Thine Arm, if he had not wished us to understand that the Father is Lord, and the Son also is Lord. A much more ancient testimony [of Christ’s deity] we have also in Genesis: “Then the Lord rained upon Sodom and upon Gomorrah brimstone and fire from the Lord out of heaven.” Now, either deny that this is Scripture; or else (let me ask) what sort of man you are, that you do not think words ought to be taken and understood in the sense in which they are written, especially when they are not expressed in allegories and parables, but in determinate and simple declarations?” (Tertullian, Against Praxeas, [In which he defends, in all essential points, the doctrine of the holy trinity.] Chapter XIII.—The Force of Sundry Passages of Scripture Illustrated in Relation to the Plurality of Persons and Unity of Substance. There is No Polytheism Here, Since the Unity is Insisted on as a Remedy Against Polytheism.)

250 AD Ignatius “For Moses, the faithful servant of God, when he said, “The Lord thy God is one Lord,” and thus proclaimed that there was only one God, did yet forthwith confess also our Lord [Jesus] when he said, “The Lord [Jesus] rained upon Sodom and Gomorrah fire and brimstone from the Lord.” And again [he confessed a second time our Lord Jesus by saying], “And God said, Let Us make man after our image: and so God made man, after the image of God made He him.”” (The Epistle of Ignatius to the Antiochians, Chapter II.—The True Doctrine Respecting God and Christ.)

253 AD Cyprian “In the Gospel according to John: “The Father judgeth nothing, but hath given all judgment unto the Son, that all may honour the Son as they honour the Father. He who honoureth not the Son, honoureth not the Father who hath sent Him.” Also in the seventy-first Psalm: “O God, give the king Thy judgment, and Thy righteousness to the king’s son, to judge Thy people in righteousness.” Also in Genesis: “And the Lord rained upon Sodom and Gomorrah sulphur, and fire from heaven from the Lord.”” (The Treatises of Cyprian, Treatise XII. Three Books of Testimonies Against the Jews. Third Book., Testimonies., 33. That the Father judgeth nothing, but the Son; and that the Father is not glorified by him by whom the Son is not glorified.)

Novatian: “For who does not acknowledge that the person of the Son is second after the Father, when he reads that it was said by the Father, consequently to the Son, “Let us make man in our image and our likeness; ” and that after this it was related, “And God made man, in the image of God made He him? “Or when he holds in his hands: “The Lord rained upon Sodom and Gomorrah fire and brimstone from the Lord from heaven? ” (A Treatise of Novatian Concerning the Trinity, Chapter XXVI. Argument.—Moreover, Against the Sabellians He Proves that the Father is One, the Son Another.)

Novatian “Therefore the Lord overturned Sodom, that is, God overturned Sodom; but in the overturning of Sodom, the Lord rained fire from the Lord. And this Lord was the God seen by Abraham; and this God was the guest of Abraham, certainly seen because He was also touched. But although the Father, being invisible, was assuredly not at that time seen, He who was accustomed to be touched and seen was seen and received to hospitality. But this the Son of God, “The Lord rained from the Lord upon Sodom and Gomorrha brimstone and fire.” And this is the Word of God. And the Word of God was made flesh, and dwelt among us; and this is Christ. It was not the Father, then, who was a guest with Abraham, but Christ. Nor was it the Father who was seen then, but the Son; and Christ was seen. Rightly, therefore, Christ is both Lord and God, who was not otherwise seen by Abraham, except that as God the Word He was begotten of God the Father before Abraham himself.” (A Treatise of Novatian Concerning the Trinity, Chapter XVIII. Argument.—Moreover Also, from the Fact that He Who Was Seen of Abraham is Called God; Which Cannot Be Understood of the Father, Whom No Man Hath Seen at Any Time; But of the Son in the Likeness of an Angel.)

Constitutions of the Holy Apostles: “To Him did Moses bear witness, and said: “The Lord received fire from the Lord, and rained it down.” Him did Jacob see as a man, and said: “I have seen God face to face, and my soul is preserved.” Him did Abraham entertain, and acknowledge to be the Judge, and his Lord.” (Constitutions of the Holy Apostles, Book V. XX. A Prophetic Prediction Concerning Christ Jesus.)