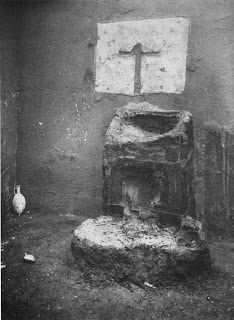 This private residence looked just like any other house in Herculaneum when it was uncovered in the 1930’s by the archeologists. However the surprise lay in a small room hidden in the back of the residence. A small room of this house kept some furniture that was carbonized and thus preserved. One of the walls had a distinct indentation of a cross that once hanged here. Appearance of a Christian community in Herculaneum is not surprising. Apostle Paul visited Puteoli (today it is known as Pozzuoli) located on Phlegrean peninsula that forms the North side of the Bay of Naples, just few miles from Herculaneum.

Scripture reference: Acts 28:13-14: “From there we cast off and arrived at Rhegium, and after one day a south wind sprang up and on the second day we came to Puteoli. There we found some brothers and were invited to stay with them seven days. And in this way we came to Rome.”

A small community apparently formed in the region surrounding Herculaneum in the 60 A.D. Existence of a cross in this building is the only thing left any physical evidence of its presence. The cross was probably hidden by something else since Christianity at the time was a persecuted religion. It could have been a painting or some type of a cabinet that hanged on two nails situated on both sides of a cross. If you were discovered you could easily find yourself on the arena with wild animals or burned alive. The owner of the house was probably caught and the wooden cross that was safely bolted to the wall was torn off before the eruption that buried the city. We can only guess what happened to the Christian or Christians who lived here, but it is highly unlikely that he/ she/ they survived harsh punishment.