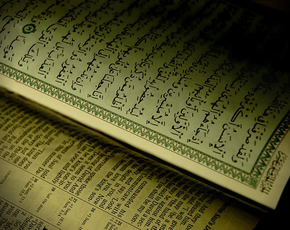 “the words of the Lord are flawless,like silver purified in a crucible,like gold refined seven times”. (Psalm 12:6).

More and more these days I find Theistic friends that are not from a Christian orientation use the prevalent view from secular scholarship predicating that the Bible books were corrupted and partially lost. Now earlier I have written on the trustworthiness of the text “The bible: now vs then”  but in this article I would like to specifically discuss the idea heralded by my Muslim friends who declares that the quran is preserved because it was promised to be preserved yet, the words of the Bible are corrupted. There seem to be numerous discrepancies with this position.

1). Like Muslims Christians are assured of the same promise that the Scriptures will and cannot be corrupted. (Mat.24:35; Ps.119:89). We therefore ask for the same courtesy and allowance for the same application of this standard concretely used in their own logic!

2). If the Christian scriptures are corrupted, what promise do we have that what is written in the Quranic Scriptures are sure? The Quran also like the Bible seemingly assured it cannot be corrupted yet, if the Bible is corrupted there is no valid reason to assume the quran is untainted simply because it’s Author (God) from both text are the originator and sole protector of both!

3). When we assert that the Bible is corrupted [even when it assures us internally & externally it is not] we clearly presume that God was impotent to preserve His own Word. So indirectly when we assume corruption we assume an impotent God.

Allow me to show clearly here what I mean:

Sometimes my Muslim friends will say that the “Qur’an is preserved in exact original form and no word of it has been distorted, interpolated, or removed”.But here are some points to consider:

1) Where is the original copies of the Quran and why don’t you apply the same standard to the validity of these texts? What did Uthman destroy? (Sahih al- Bukhari 4987)

Interpolations – What about the foreign elements prevalent in the Quran? [Jewish folklore, Gnostic sources, Zoroastrian and Buddhist]. What is was known to be false theologically, historically and pseudonymously is validated in the qur’anic text?

Removed – Some early Muslims forgot entire surah’s [Sahih Muslim 2286]. Some passages disappeared [Sahih Muslim 3421] and even Muhammad struggled to remember some [Sahih Muslim 1721/1726] even more is that his companions forgot [Sahih Muslim 2286]. There are also variants in the earliest qur’anic manuscripts that have similar variations as you mentioned of the NT. Muslims hold that these variousions in the Biblical text is evidence of corruption but we can answer emphaticaly that if you are consistent, it should be counted as an impeachment of the validity of the qur’anic text as well! Examples of variants would be nl. Diacritical variants between Sanaa 01-29.1 and BNF 334c where there is a variant reading between ‘Ta’ instead of ‘ya’. Further we find omitted words in the qur’anic manuscripts as well nl. in the standard text 14.37:2 BNF 340c against what is now in the standard reading BNF370a. There is also different words found in the current standard text which was corrected nl. ‘wa’ for ‘fa’ [S.14.37 from BNF 331 to BNF328a]. There are also physical corrections in the qur’anic manuscripts either by original scribes and latter ones. All these reasons would be consistent with the same applied reasoning you gave for the falsification of the Biblical text to also deny the cogency of the Quranic text. The question is will they reasoning be consistent? I doubt it…

17:55 – Even the Study Quran says this Arabic term [Al-Zabur] given here refers to ‘the Psalms found in the Biblical corpus’ (pg.710). So you claim the promise of preservation does not apply to this book, yet, the same book conclusively maintains that it is preserved (PS.119:7-8, 89-91). Can Muslims please show which passages were changed and also give a clear indication of the supposed alterations made as they claim?

21:105 – So that which we have is corrupt and that which you have is uncorrupted? How convenient.. Allah preserves only the Quran but not the rest in which there is guidance and light. Further, the revealed ‘kitab’ which includes the books of the prophets are succinctly kept in heaven on a preserved tablet in heaven but not on earth which also contradicts the fact of the ayah that ‘the righteous shall inherit the earth’.

3:3-4 – The commentators of the Study Quran mentions that “It is UNLIKELY that in the early seventh century the text in circulation would have been significantly different from the texts approved by Jewish and Christian authorities at the end of the fourth century, when both canons and the central doctrines of Christianity, including the Trinity, were formally established”(Pg.128). Even more, if truth and light which was revealed can be corrupted, what supposes that truth and light revealed in the Quran is currently  intact! Just mere preference and circular affirmations.

3:48-50 – Again the irony is inescapable! If the Quran is a ‘furqan’ and supposed to ‘confirm’ that which was before [which is now falsified] it cannot claim to correspond to its own claim of direction which shows clearly it is a flawed standard of operation…

5:43-48 – So what has ‘guidance and light’ can be corrupted, and again, the prophets are supposed to submit and judge to that which can be corrupted and changed… so we cannot really judge by it currently because it has been changed right? So why bother.. How are we to judge by that which is sent down that the Quran affirmed to be trustworthy because it contains guidance and light? Where does it say in the same verse “but beware for the corrupt parts” in those very words? And how can we confirm what the Quran confirms before it when that is corrupted. Again, the Quran makes a claim it cannot validate if we interpret it the way you do?

10:94 – “ASK THOSE WHO ARE READING THE BOOK”. Again, the Quran is drawing for a standard that it cannot maintain.

40:70 – If you deny ‘that wherewith We have sent Our messengers” you stand the risk of hellfire… But if we don’t have that which has been sent the Quran sets up a false standard and makes a false claim because no one can see what these original books looked like in their pre-corrupt form and thereby cannot be said to deny those… Again! Fail!

Another interesting point is that there are no evidence within the Qur’an that the Jewish and Christian literature were corrupted. My mentor  John Gilchrist wrote [the] “Support for this view was sought in the Qur’an itself but, although the book often charges the Jews and Christians with deviating from their TEACHINGS, they are never accused of actually perverting them.” (The Qur’an: The Scripture of Islam. Pg 39) Even early Muslim scholars affirm accuse them of twisting the meaning of words but never tampering with the text itself! Read: Muslim Scholars on Bible Corruption

5). Therefore we can deduce that “if” the Gospel is corrupted,according to the Quran’s own standards, Mohammad is a liar and a false prophet,yet, if the Bible is not corrupted (Surah 3:3-4) its inherent claims clearly shows Islam to be false. Therefore; both ways Islam is false.

6).The Quran makes it clear that those who declare that the God’s Words [Bible included] are corrupted will be severely punished. (Surah 40:70-72).

7). Mohammad affirms that Christians must judge by their own book yet, if we do and it was corrupted Mohammad was a false prophet and the Quran is false, yet, if it is true the Quran is still false because it contradicts the Bible. (Surah 5:47).

Interesting: The Qur’an says that the original New Testament is a revelation from God.

Surah 5:46, “And We sent, following in their footsteps, Jesus, the son of Mary, confirming that which came before him in the Torah; and We gave him the Gospel, in which was guidance and light and confirming that which preceded it of the Torah as guidance and instruction for the righteous.”Surah 5:68, “Say, “O People of the Scripture, you are [standing] on nothing until you uphold [the law of] the Torah, the Gospel, and what has been revealed to you from your Lord.” And that which has been revealed to you from your Lord will surely increase many of them in transgression and disbelief. So do not grieve over the disbelieving people.”

Surah 5:69, “Indeed, those who have believed [in Prophet Muhammad] and those [before Him] who were Jews or Sabeans or Christians – those [among them] who believed in Allah and the Last Day and did righteousness – no fear will there be concerning them, nor will they grieve.”

Interesting: The Qur’an also confirms that Jesus was a Prophet and His words should be believed by Muslims.

Surah 4:171 “O People of the Scripture, do not commit excess in your religion or say about Allah except the truth. The Messiah, Jesus, the son of Mary, was but a messenger of Allah and His word which He directed to Mary and a soul [created at a command] from Him. So believe in Allah and His messengers.”

Surah 5:78 “Cursed were those who disbelieved among the Children of Israel by the tongue of David and of Jesus, the son of Mary. That was because they disobeyed and [habitually] transgressed.”

Surah 5:69, “Indeed, those who have believed [in Prophet Muhammad] and those [before Him] who were Jews or Sabeans or Christians – those [among them] who believed in Allah and the Last Day and did righteousness – no fear will there be concerning them, nor will they grieve.”

It is important to note that Christians were obligated to accept the New Testament of Muhammad’s day.
Surah 10:94 “So if you are in doubt, [O Muhammad], about that which We have revealed to you, then ask those who have been reading the Scripture before you. The truth has certainly come to you from your Lord, so never be among the doubters.”

What is the bottom line teaching of the New Testament?