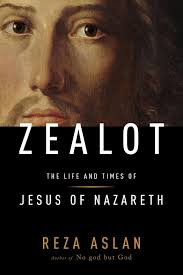 Currently on the New York NR1# best seller list is Reza Aslan’s “Zealot: the life and times of Jesus of Nazareth”. In this article I would like to look at seven of Aslan’s points and weigh its validity:

1. Jesus was a violent revolutionary

Many scholars have argued that Jesus was a political figure. After all, he was crucified by Rome, and crucifixion was at the time a punishment for political offenses. But these scholars often claim, as John Dominic Crossan did in “Jesus: A Revolutionary Biography,” that Jesus was a nonviolent revolutionary. Aslan portrays Jesus as a man of war who worshiped the“blood-spattered God of Abraham, and Moses, and Jacob, and Joshua” and who knew full well that “God’s sovereignty could not be established except through force.”

Was Jesus violent? Let me say from the beginning Jesus did use violence (Matthew 21:12-13, Mark 11:15-18, Luke 19:45-47, John 2:13-16) in cleansing the temple. Jesus was not a pacifist, and the overall context of scripture does not depict the God of the Bible as one being one. God’s judgement sometimes brings a violent end to those who are wicked. An example of this could be found with His dealing with the Canaanites due to their wickedness. Deuteronomy says “Every abominable thing that the Lord hates they have done for their gods” therefore man’s ultimate end of rebellion in to meet the wrath of a Holy God (Deut. 12:31).

Is this a total contradiction to the teachings of Jesus where He encouraged us to “love our neighbor as you love yourself” (Mat19:19) or “turn the other cheek” (Mat5:39) or “Blessed are the peacemakers”? (Mat5:9) Isn’t God love (Mat5:9) and therefore by His very nature passive? (1 Joh4:16) Not at all! We are encouraged to do all these good things yet, we can see clearly in Scripture that the Wickedness of man sometimes extends to the degree where the reluctance or grace of God runs out. A loving God would not be “love” if He allowed wickedness to co-exist with His expressed holiness. A just God by His very own self-revelation HAS to punish sin! Christians believe if in man’s eyes all possible means have been exhausted to bring wickedness to repentance the final resolve will always be God’s destruction. God can bring forth destruction through natural causes (Deut11:17, Jam5:17, Num 16:30-34) as well as a specific nation or people (Gen15:16, Num 21:3, 31:1-7, 32:20-21, Deut 7:1-2, Jos 6:20-21, 8:1-8, 10:29-32, 11:7-20). We can clearly see that the biblical imperative and the reality of mankind as a whole demands violence. Not because God is violent by nature, but because man is essentially wicked and wickedness requires judgement.

Aslan asserts that Jesus’ kingdom was neither purely nor predominantly spiritual… He preached “a physical and present kingdom: a real kingdom, with an actual king that was about to be established on earth.” In the Gospel of John, Jesus famously says, “My kingdom is not of this world, if it were, my servants would fight to prevent my arrest by the Jewish leaders. But now my kingdom is from another place.”” (Joh18:36). In anoth

er passage Christ makes it absolutely clear that He was NOT going to establish an earthly kingdom (Joh6:15) by shunning the very attempt of the people. The problem with Aslan is he has marginalized the definition of the Biblical explanation of the Kingdom.

H. Leo Boles suggests the “kingdom of God” may have five applications:

We see clearly the problem of Aslan’s assessment is to marginal and NOT the understanding of the Scriptures.

Jesus didn’t just take on Rome. He took on Jewish authorities, in particular those who ran the Jerusalem Temple. “There can be no doubt,” writes Aslan, “that Jesus’s main antagonist in the gospels is neither the distant emperor in Rome nor his heathen officials in Judea. It is the high priest Caiaphas, who will become the main instigator of the plot to execute Jesus precisely because of the threat he posed to the Temple’s authority.” Aslan here again marginalize the overall story of the Bible. The Fact is that we revolted against God (Gen3) and as a result God’s Wrath burned against us! In fact before the Gospel is “good news” it is firstly “bad news” that shows God’s displeasure with us.

R.C. Sproul writes “God’s grace is not infinite. God is infinite, and God is gracious. We experience the grace of an infinite God, but grace is not infinite. God sets limits to His patience and forbearance. He warns us over and over again that someday the ax will fall and His judgment will be poured out… “Sin is cosmic treason. Sin is treason against a perfectly pure Sovereign. It is an act of supreme ingratitude toward the One to whom we owe everything, to the One who has given us life itself. Have you ever considered the deeper implications of the slightest sin, of the most minute peccadillo? What are we saying to our Creator when we disobey Him at the slightest point? We are saying no to the righteousness of God. We are saying, “God, Your law is not good. My judgement is better than Yours. Your authority does not apply to me. I am above and beyond Your jurisdiction. I have the right to do what I want to do, not what You command me to do. “There are only two ways that God’s justice can be satisfied with respect to your sin. Either you satisfy it or Christ satisfies it. You can satisfy it by being banished from God’s presence forever. Or you can accept the satisfaction that Jesus Christ has made.” (The Holiness of God).

In Aslan’s attempt to marginalize the overall plot of the Scriptures he again attempted to tell a half-truth concerning the narrative found in the Bible.

4. Palm Sunday is the key moment in the Jesus story

Every Jesus biographer has a key moment in the life of Jesus when his essence is revealed. For Aslan, that moment comes when Jesus mounts a donkey and rides into Jerusalem. In this celebration, commemorated in the Christian world every year on Palm Sunday, Jesus is not demonstrating his humility. Instead, he is announcing his kingship. The “unmistakeable” message of this scene, according to Aslan, is that “the long-awaited messiah — the true King of the Jews — has come to free Israel from its bondage.”

Through and through the book Aslan tries to redefine the emphasis of the overall Biblical narrative. The Bible story is not essentially about Christ’s desire to be King (In Luke 4:5-8 we see clearly Christ denying this very desire). His essential mission to earth is foundationally expressed by the Apostle John (Joh3:16) and we see the highlight of this expressed in His death, resurrection and ascension as expressed in the Gospels.

5. The early church turned Jesus into a pacifist preaching a spiritual kingdom

In 66-73 CE, a bloody Jewish revolt against Rome left Jerusalem in ruins and chastened the early Christians, who reinvented Jesus as an apolitical figure in order to make nice with Rome. Those who wrote of Jesus in this way (Paul included) never met the man, and, in Aslan’s view, they badly mischaracterized him, turning “their messiah from a fierce Jewish nationalist into a pacifistic preacher of good works whose kingdom was not of this world.” (Refer to point 2)

6. The idea that Jesus was God also originated with the early church

As a Jew, Aslan observes, Jesus would have rebelled against any notion that God is incarnated in human flesh.  Therefore, the elevation of Jesus to divinity must have come after his crucifixion, at the hands of Greek-speaking Jewish Christians who “transformed Jesus from a revolutionary zealot to a Romanized demigod.” Richard Bauckham has a different idea when he writes “early Judaism had clear and consistent ways of characterizing the unique identity of the one God and, thus, distinguishing the one God absolutely from all other reality. When New Testament Christology is read with this Jewish theological context in mind, it becomes clear that, from the earliest post-Easter beginnings of Christology onwards, early Christians included Jesus, precisely and unambiguously, within the unique identity of the one God of Israel.”(Jesus and the God of Israel).

James Dunn writes “Whatever we can or should say about Jesus and His mission, there can be little or no question that what the first Christians believed had happened to Jesus after His death transformed their appreciation of Him completely. For they were convinced that God had raised him from the dead. This is the core affirmation of Christians faith, and it can be traced back firmly to the earliest days of the movement that stemmed from Jesus, and in particular to the visionary experiences that the first Christians had of Jesus as risen from the dead and exalted to heaven. Such belief was already a confession by the time Paul was himself converted, which was probably less than two years after Jesus’ crucifixion (1Cor.15.3-7). And Paul was probably converted to beliefs that he had persecuted, believes already well-established among the first members of the sect of the Nazarenes.” (Did the First Christians Worship Jesus – James D.G.Dunn (Pg101-102).

Scripturally we find when we read John 5 Christ shares the following attributes of God. Jesus and the Father are: V/17- One in Working, V/19 – One in Will, V/21 – One in Prerogative, V/23 – One in Honour, V/26 – One in Giving Life, V/27-30 – One in Judicial Power. I have written much more elsewhere on this blog and suggest you look at the biblical imperative concerning the Divinity of Christ.

7. The Bible isn’t to be believed (as history)

In “Zealot,” Aslan repeatedly refers to passages in the New Testament as “preposterous,” “fanciful,” “obviously contrived,” “riddled with the most basic errors,” “simply ridiculous,” and “absurd to the point of comedy.” Here the Bible is a source for data about Jesus’s life, but that data must be carefully sifted through a scholarly lens and in particular through the socioeconomic realities of life in the ancient Mediterranean at the time of Jesus. At least as Aslan sees it, Jesus probably didn’t tell his followers to turn the other cheek. He probably did say, “Do not think that I have come to bring peace on earth. I have not come to bring peace, but the sword” (Matthew 10:34).

There is much to be said on the Historical reliability of the text. The historical accuracy of the Scriptures is likewise in a class by itself, far superior to the written records of Egypt, Assyria, and other early nations. Archaeological confirmations of the Biblical record have been almost innumerable in the last century.

Dr. Nelson Glueck, probably the greatest modern authority on Israeli archaeology, has said: “No archaeological discovery has ever controverted a Biblical reference. Scores of archaeological findings have been made which confirm in clear outline or in exact detail historical statements in the Bible. And, by the same token, proper evaluation of Biblical descriptions has often led to amazing discoveries.” Norman Geisler writes, ―No archaeological find has ever refuted a biblical claim, and thousands of finds have confirmed in general and in detail the biblical picture‖ (Systematic Theology, Vol. 1, p. 557). Examples of archaeological confirmations include the Tower of Babel (Gen. 11); Sodom and Gomorrah (Gen. 18-19); the fall of Jericho (Josh. 6); King David (2 Sam.); and the Assyrian Captivity (Isa. 20). In the New Testament book of Acts alone there are hundreds of archaeological confirmations.

Sir William Ramsay (Surely no relation to the hyper T.V. Chef Gordon Ramsey) a sceptic wrote after decades of research, ―I found myself often brought into contact with the book of Acts as an authority for the topography, antiquities, and society of Asia Minor. It was gradually borne in upon me that in various details the narrative showed marvelous truth‖ (St. Paul the Traveler and the Roman Citizen, p. 8, quoted in Systematic Theology, p. 558). These are the words of a well-known sceptic and researcher!